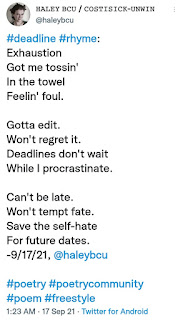 Exhaustion
Got me tossin'
In the towel
Feelin' foul.

Love Always, @HaleyBCU
Posted by @haleybcu at 11:41 AM No comments: 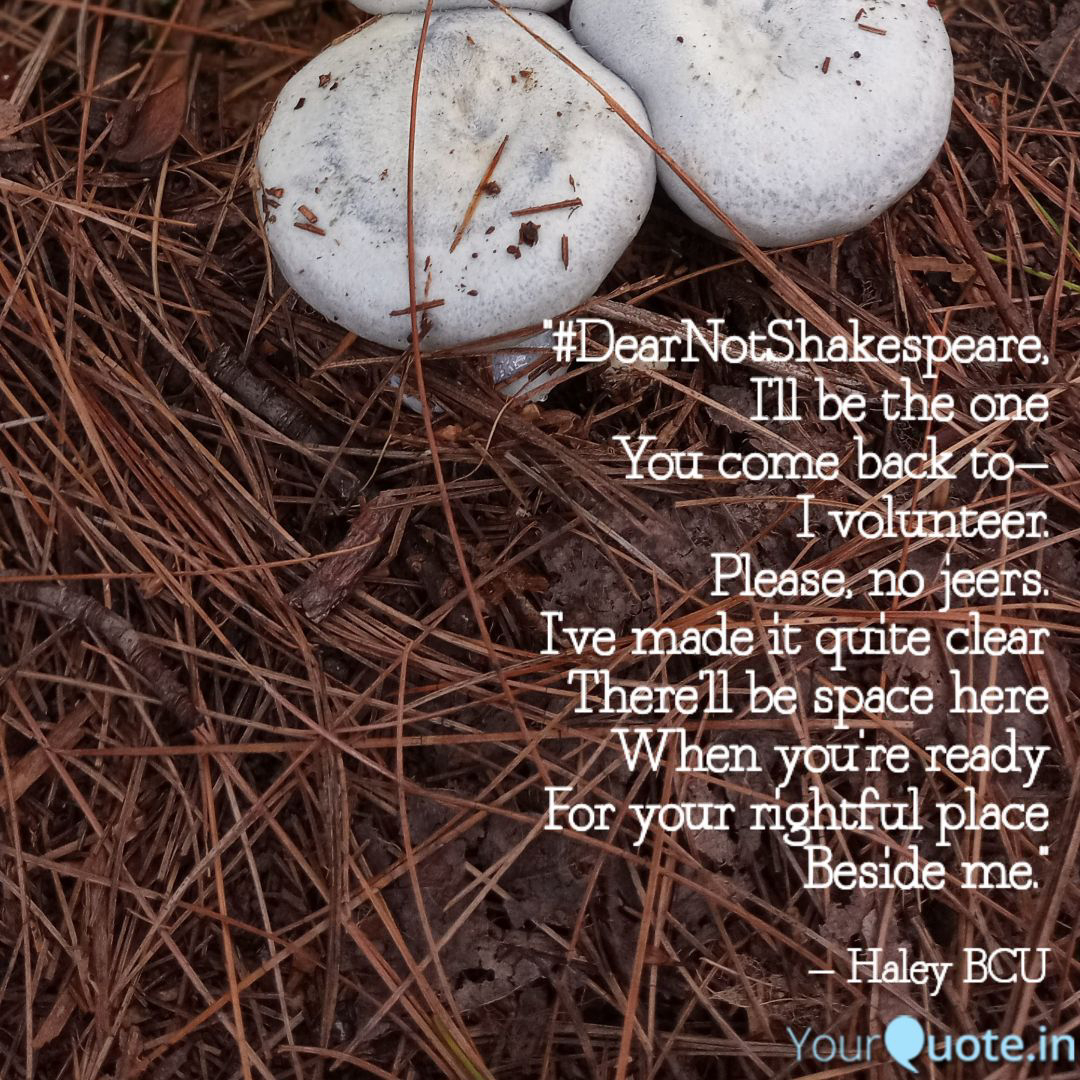 "#DearNotShakespeare
I'll be the one
You come back to.
I volunteer.
Please, no jeers
I've made it quite clear
There'll be space here
When you're ready
For your rightful place
Beside me."
Love Always,
@haleybcu
P.S. Read my thoughts on @YourQuoteApp
Posted by @haleybcu at 8:15 AM No comments: 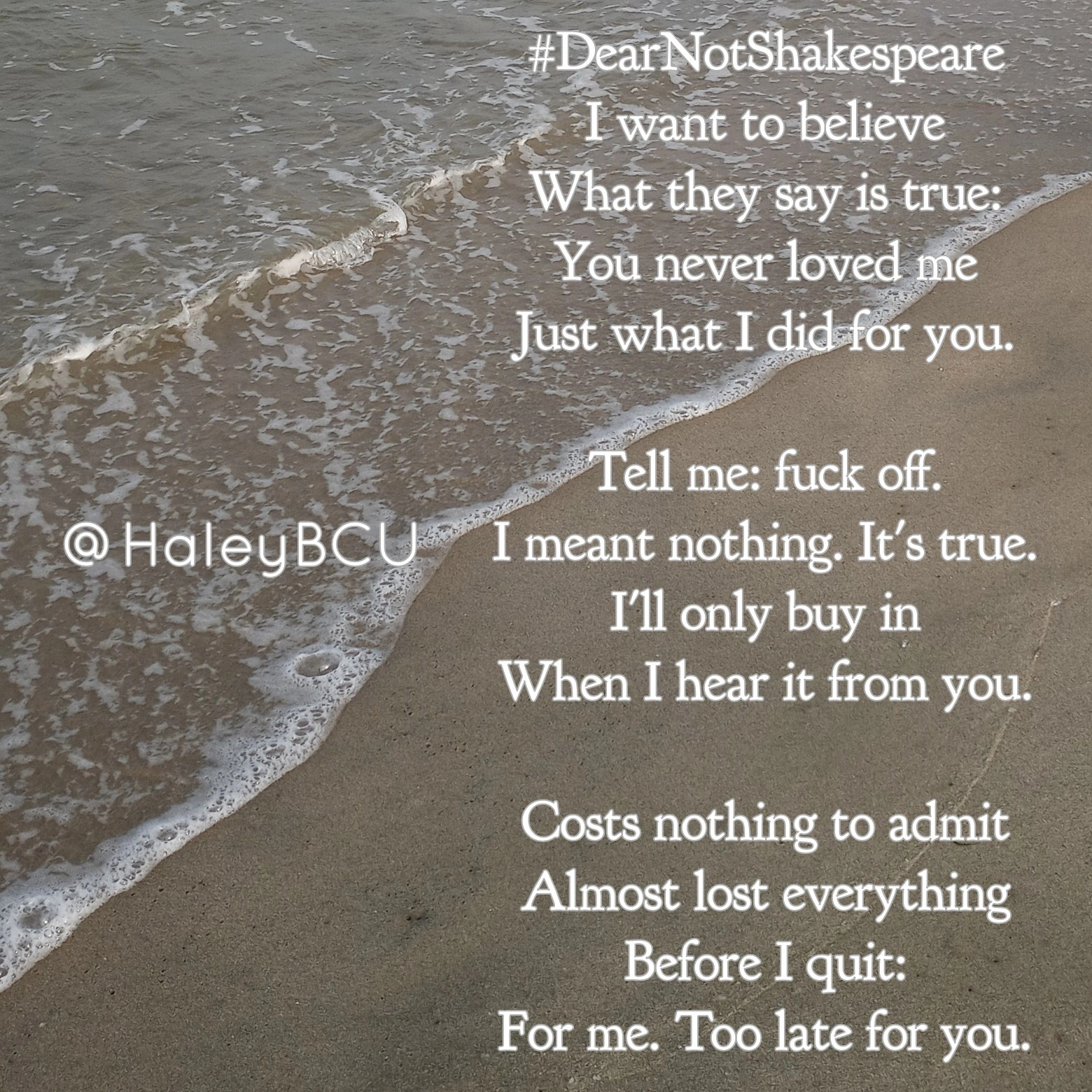 #DearNotShakespeare
I want to believe
What they say is true:
You never loved me
Just what I did for you.
Tell me fuck off
I meant nothing. It's true.
I'll only buy in
When I hear it from you.
Costs nothing to admit
Almost lost everything
Before I quit:
For me. Too late for you.
© @haleybcu (image & #poem)
-5:38 AM on Thursday, July 29th, 2021
Posted by @haleybcu at 7:24 AM No comments:

Tonight
is one of those nights
I can't fathom
how you hate me.
It's not that
I don't see how.
I go through
periods of hating me
often enough to know;
it's possible.
But.
Allowing myself
to believe you hate me?
I won't. Maybe I can't?
I trust my brain:
we need each other.
-@haleybcu
2:55 AM, July 13th, 2021
© Tragic Sandwich Productions
Posted by @haleybcu at 12:36 AM No comments:

During an application for a scholarship, I was faced with this hardly-innocuous query:
Write about the hardest thing you've ever done.
I didn't think. Simply tapped a finger in the text box and began slugging away with my injured thumbs:
The hardest thing I've done is the easiest to write about, and the underlying topic of every piece of fiction I pen; losing my father. He was stolen from my life at age nine by choices all his own, and it's as if my fully-formed memories stop there. Everything that's taken place afterward feels like a lucid dream, and I've been in that dream-state for the past fifteen years. His loss might not have been as abrupt and jarring, if I had not been kept in the dark about the severity of his illness. I was allowed to coast happily through the beginning of 4th grade without a care in the world, not having an inkling my father wouldn't make it to Christmas. My mother attempted to shield me from the horrors of reality, and when the time finally came for us to face it together; she choked, leaving my half-sister to blather on something asthenine about Angels and my father being one of them, ready to spread his wings.
Confused. Devastated. But mostly numb, I rode to the hospital I'd stopped visiting because there had seemed no point. I'd see dad when he came home. Why bother to visit?
No one forced me to go. Explained we might have little time. I barely saw him, then said goodbye to his eyes because he was intubated. I cried, I apologized, rode home in silence, and my mother never mentioned it again.
I found his urn two years later.
Love Always,
@HaleyBCU
Posted by @haleybcu at 2:00 PM No comments:

My addiction,
Your predeliction
Created fiction
And endless friction.
No other muse
Could I choose
To see me through
Perpetual blues.
But I wouldn't do.
And you?
You couldn't make due.
Wouldn't. This shit's on you.
Allow these words
To properly serve
From me to you
This temporary adieu;
My visibility
No longer gives a fuck
About your fragility.
© @haleybcu, 5 AM on June 9th, 2021
Posted by @haleybcu at 10:13 AM No comments:

Dear NotShakespeare,
I'm sick of writing books for you.
To you. About you.
I'm revolted by my prose,
Nauseated by my poems, &
Vexed by my text.
Hexed.
Cursed.
You're the fucking worst,
& I love you
More than most.
© @haleybcu, May 27th, 2021
Posted by @haleybcu at 1:13 AM No comments:

You admitted
To dreaming about
My apartment
"all the time."
An intentionally
Cautious statement.
Implying your lack
Of comfort with
Simply stating
You've been dreaming
About me.
But you have.
Admitedly so.
Admitted to me
While I anxiously hung
On your words
Reading your face
Trying not to say
"The wrong thing."
Five years ago
I remarked
part of the magic
of our bond
Was sitting atop
Mt. Friendship
While judging
the serfs.
Your expression soured
As you stated plainly,
"I'm not judgmental."
And the corner of your mouth
Quirked up.
Before you laughed
Wide and honest.
A moment etched
Deep in my mind.
When I called you yesterday,
I thought I waited long enough.
Because too long
Would be equally as treacherous.
I didn't "Princess you"
Spoke openly
While not admitting how much
I needed your brain
To help unscramble
My own.
I knew I'd said too much
When I hung up
Which is why I waited
4 fucking years
To try the first time.
"You're exactly what
You're supposed to be -
Which is a beautiful,
Twisted work in progress."
"I'll never cut you off like she did."
"You're my best friend."
You've said so much
Meant so little
And in the end,
I can only say this;
You have no idea
The weight off my shoulders
You removed
By taking my book.
© @haleybcu
Posted by @haleybcu at 1:10 AM No comments:

Shredded
-My heart-
Torn apart
Like manic art
From the
Inside out.

She lied.
I cried. (Surprise)
Denied.
"Further affection-
Need not
Be applied."

I tried
With no guide
Zero pride
Nothing but love
On my side.
Tried. #poem